The Legal, Regulatory & Compliance Forum on Dietary Supplements, co-hosted by the American Conference Institute (ACI) and the Council for Responsible Nutrition (CRN), brings together lawyers, regulatory experts, regulators (FDA & FTC), brand owners, and a couple of scientists to address a number of topics.

Here are some highlights:

It has been a couple of months since FDA announced it would exercise enforcement discretion around NAC (N-acetyl cysteine), a derivative of the amino acid L-cysteine and is a precursor of the cellular antioxidant glutathione that can be found naturally in foods like onions and garlic.

Despite being used as in supplements since the early 1990s, and therefore an “old dietary ingredient” according to the Dietary Supplement Health and Education Act of 1994 (DSHEA), the FDA declared in July 2020 that NAC was not a legal dietary ingredient because of its prior approval as a drug. NAC was first approved as an inhaled mucolytic drug in 1963.

According to FDA’s enforcement discretion, which was announced in April 2022, dietary supplement products formulated with NAC may continue to be sold, so long as no egregious disease-treatment claims are made (a stricture which holds true for any dietary supplement).

2. We repeat, file those NDINs​

Dr Shao also provided an interesting case study to reinforce that last point. Anatabine citrate, he noted, is an alkaloid with purported anti-inflammatory properties that is present in small amounts in plants like tobacco and tomato. The ingredient was marketed as a dietary supplement under the brand name Anatabloc in 2011. In 2012, anatabine citrate was the subject of an IND (investigation new drug) authorization from the FDA.

Despite the ingredient being on the market in a dietary supplement prior to the IND, the FDA sent a warning letter about Anatabloc. Why? Because the FDA viewed the ingredient as an NDI but the company had failed to notify the Agency. (for more information, here’s an extensive article from HerbalGram #104​​).

This leads to the NDIN Paradox, said Dr Shao. “Many companies avoid the NDIN process because of concerns over resources, piggybacking, lack of data, competency, lack of exclusivity, and so on, but filing an NDIN may provide security against the drug preclusion later on.”​

Dr Cara Welch, PhD, Director of the Office of Dietary Supplement Programs (ODSP) at the FDA, presented data on NDI notification outcomes, noting that the Agency has reviewed a total of 1,164 NDINs since the passage of DSHEA in 1994.

“I’m really encouraged by the increases in the AKLs,”​ said Dr Welch.

When asked how many of these AKLs were resubmissions of previous IALs or ICLs, Dr Welch said the Agency is still drilling down into the data on that.

Emily Lyons from Husch Blackwell LLP and Andrea Golan from Vicente Sederberg LLP walked attendees through the confusing world of existing and potential CBD and hemp regulations, noting that there is an “encouraging” evolution at the State level on where CBP products are allowed.

“Congress to the rescue?”​ asked Golan. “Probably not.”​

Despite the lack of optimism given FDA’s concerns and the atmosphere in Congress, there are ways to move the category forward, they said. These include:

1. Continue to conduct robust and reliable science on safety & toxicology

2. Consider alternative cannabinoids to focus R&D on that may not be subject to the statutory prohibition and may have better safety profile

3. Congress will likely have to step in to give a clear pathway without more safety & tox data

4. There will also be a continued proliferation of products that contain CBD, they noted.

5. Elderberry supply could be very tight this year ​

One of the stars of the pandemic years was elderberry, with sales increasing 200% in the USA. However, this put pressure on supply, which mostly comes from Europe. Dr Stefan Gafner, PhD, Chief Science Officer at the American Botanical Council, noted that it can take two to four years to have fruit-producing trees, so any new acreage planted during the pandemic will not be ready for this year’s products. Couple this with a low harvest yield in 2021 in Europe and “there’s not enough elderberry out there to fill the demand,”​ said Dr Gafner.

Day two of the conference kicked off with a look at what’s happening at the State level, both in terms of recent state legislative efforts to limit access to select classes of dietary supplements (like Rhode Island​ and California​, but there are more), and also the activity of State Attorneys General (AGs).

Attorney Meghan Stoppel from Cozen O’Connor told attendees that State Unfair or Deceptive Acts or Practices (UDAP) are analogous to section 5 of the FTC Act, and that State AGs are looking everywhere for potential investigations and evidence of unlawful conduct, including consumer complaints, class actions, reports from other state agencies, the academic literature, the BBB’s NAD, FDA warning letters, and media reports.

Claims that are receiving increasing scrutiny by State AGs involve those focused on greenwashing or eco-friendly, and organic, non-GMO, or ‘toxin-free’.

“The risk of scrutiny is especially high when terms used on labels or in marketing are undefined (in law or elsewhere),” ​she said. “For example, hypoallergenic or natural.”​

7. Plastics are going to be a real headache for this industry ​

The dietary supplements industry (and other CPG sectors) is also going to have to deal with state laws on post-consumer recycled plastic, said Jeff Brams, Chief Innovation & Legal Officer, Garden of Life, Inc. and attorney Katie Bond, a Partner at Lathrop.

“This is one of the areas where the law is moving faster than the industry,” ​said Brams.

Brams explained that we have limited access to recycling in the US and shipping issues means importation from elsewhere has been challenging.

“Virgin resins were no longer available during COVID,” ​he said, “so we saw advance purchases of PCR. What was happening just before these laws were enacted was that demand for PCR was accelerating. And then the laws passed and that increased demand further,” ​he said, noting that the price of PCR pellets has tripled.

“Access to PCR starter material is more limited than ever before. This is the beginning of a supply chain nightmare.”​ 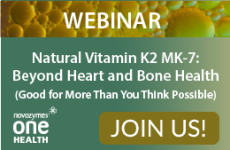 In the New Year, many consumers prioritize health or explore a detox. Enter glutathione, known as the “master antioxidant”.